Franky Leyssens is co-owner of Leybel Classics in Herent, Belgium, but we reckon he is preferably referred to as a collector rather than a car dealer. Collecting valuables has always been part of the Leyssens family, after all. “Our family business started around 1956, after completing the reconstruction of our depot that had been bombed during the second world war. Initially the business specialised in collecting army materials, together with the processing of old vehicles for scrap metal. As part of that activity my family started collecting and trading rare memorabilia then and there. I guess that the passion for collectibles has been passed on in our family ever since.” 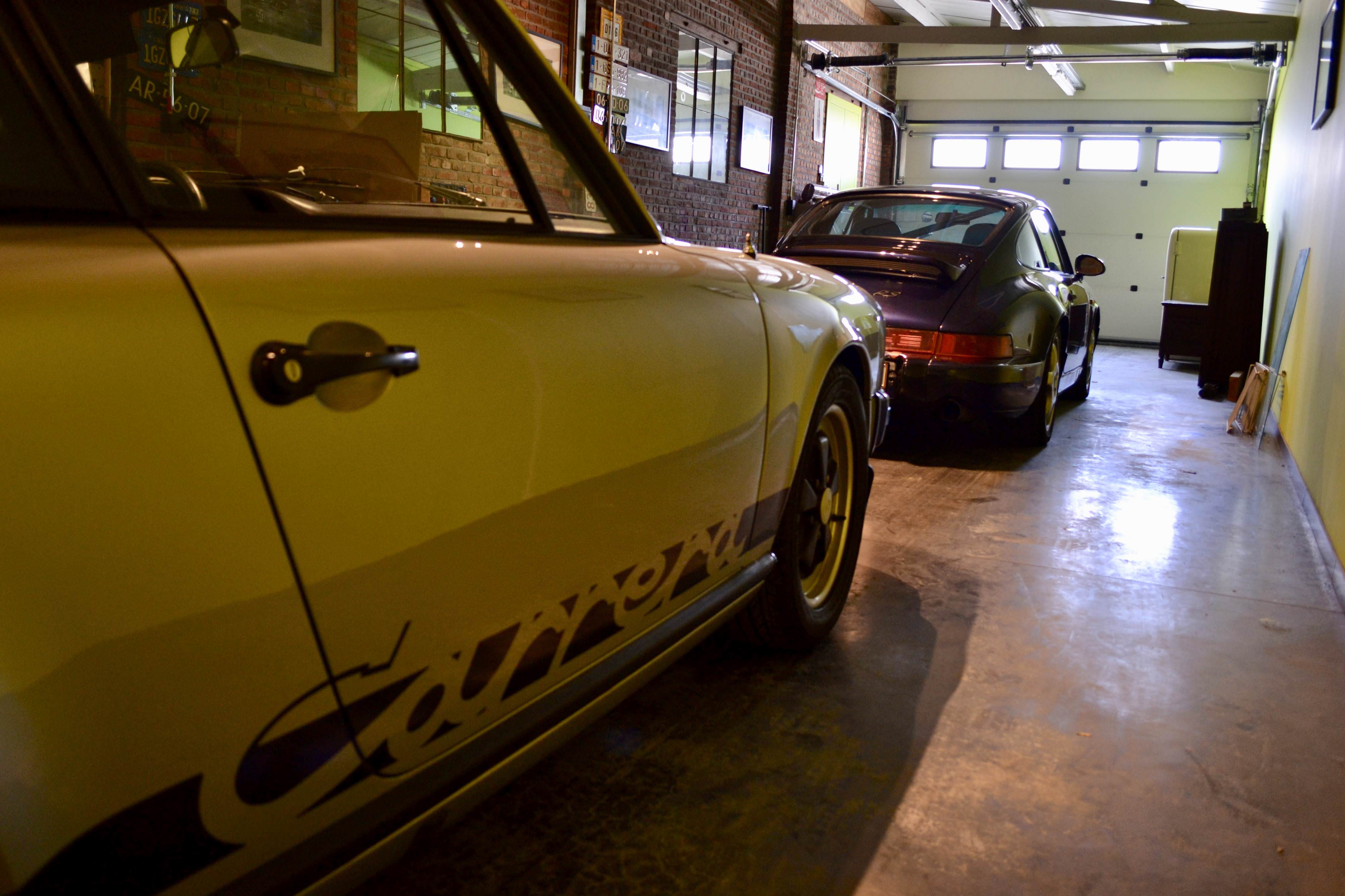 As for Franky, his interest in collectibles firstly focused on motorbikes at a very young age. “I used to spend my days working on my bikes on the family grounds. This lead me to become somewhat of a full-fledged mechanic, even though I never got an official degree.” Even before he was of driving age he shifted to collecting cars. “The first cars I started working on were Minis. I used to drive them around on the family compound. Later my interest shifted to BMWs and Porsches, which still remain my favourite brands today.” 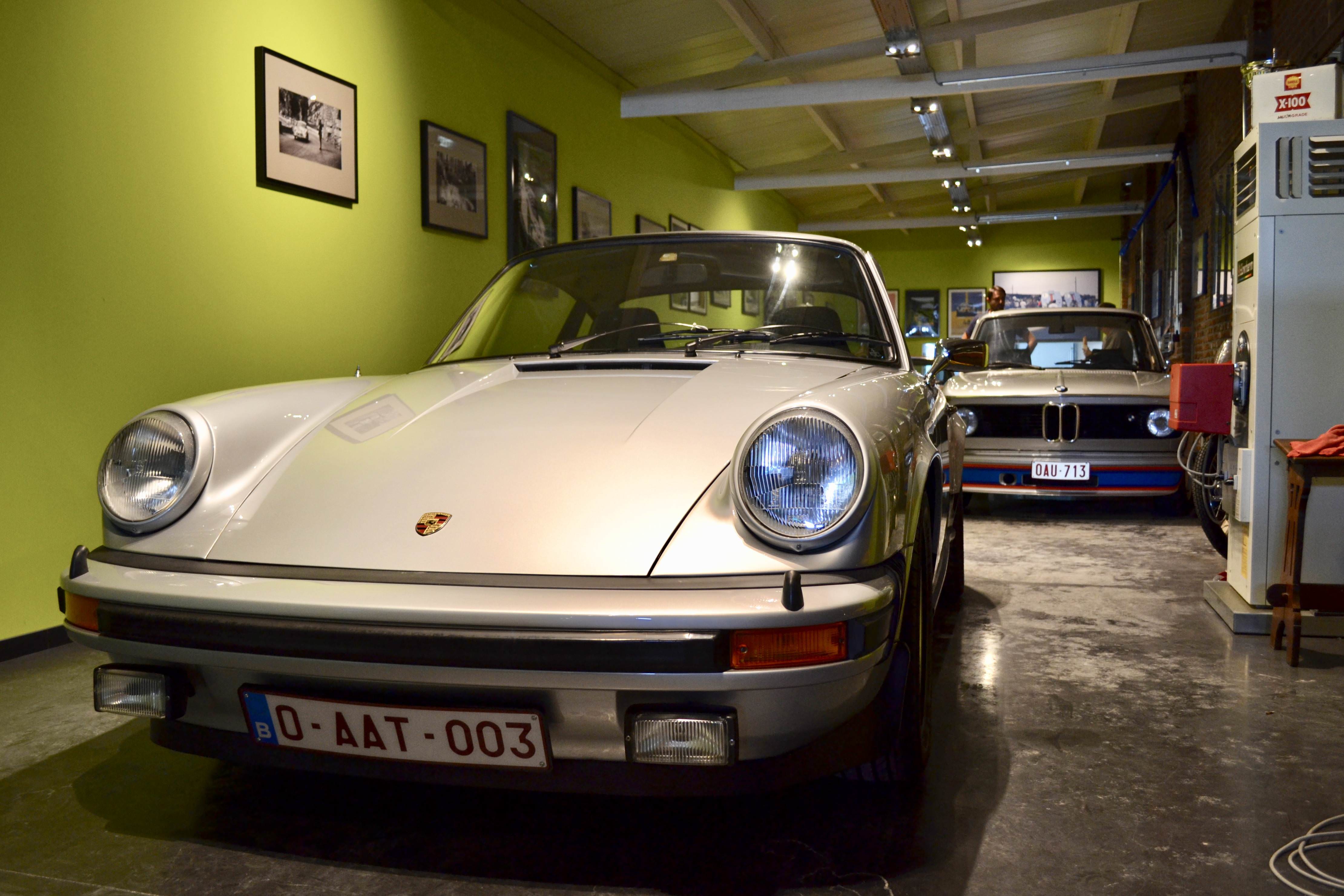 His first take on Porsche 911 ownership ended up leaving a lasting memory for Franky: “The first Porsche 911 I owned was a 2-litre, 1969 911E. I acquired the car in its original, unrestored condition from a Dutch owner who had imported it from the United States. The car was delivered new in Arizona and it was only years later, after searching for the name of the original buyer, that I discovered that the car was used for smuggling contraband from Mexico into the United States. The original owner turned out to be convicted and his car was confiscated by authorities, after which it was sold to an owner in New York, from whom the Dutch owner had imported the car just two years before selling it to me. We later even discovered that the car had a dumping hole on the passenger side, fitted right underneath the floor mat. The car was finished in Ivory White, showing signs of its notorious history through little cracks in the paint. The car had an amazing patina. I still look for that patina in every car that I buy. A car is original only once; which is when it leaves the factory. No restoration, no matter how good, can ever replicate that state of perfection on any car in my opinion.” He would go on to buy and sell many Porsche 911s, including such cars as the 964 Carrera RS and the 964 Turbo 3.3L. 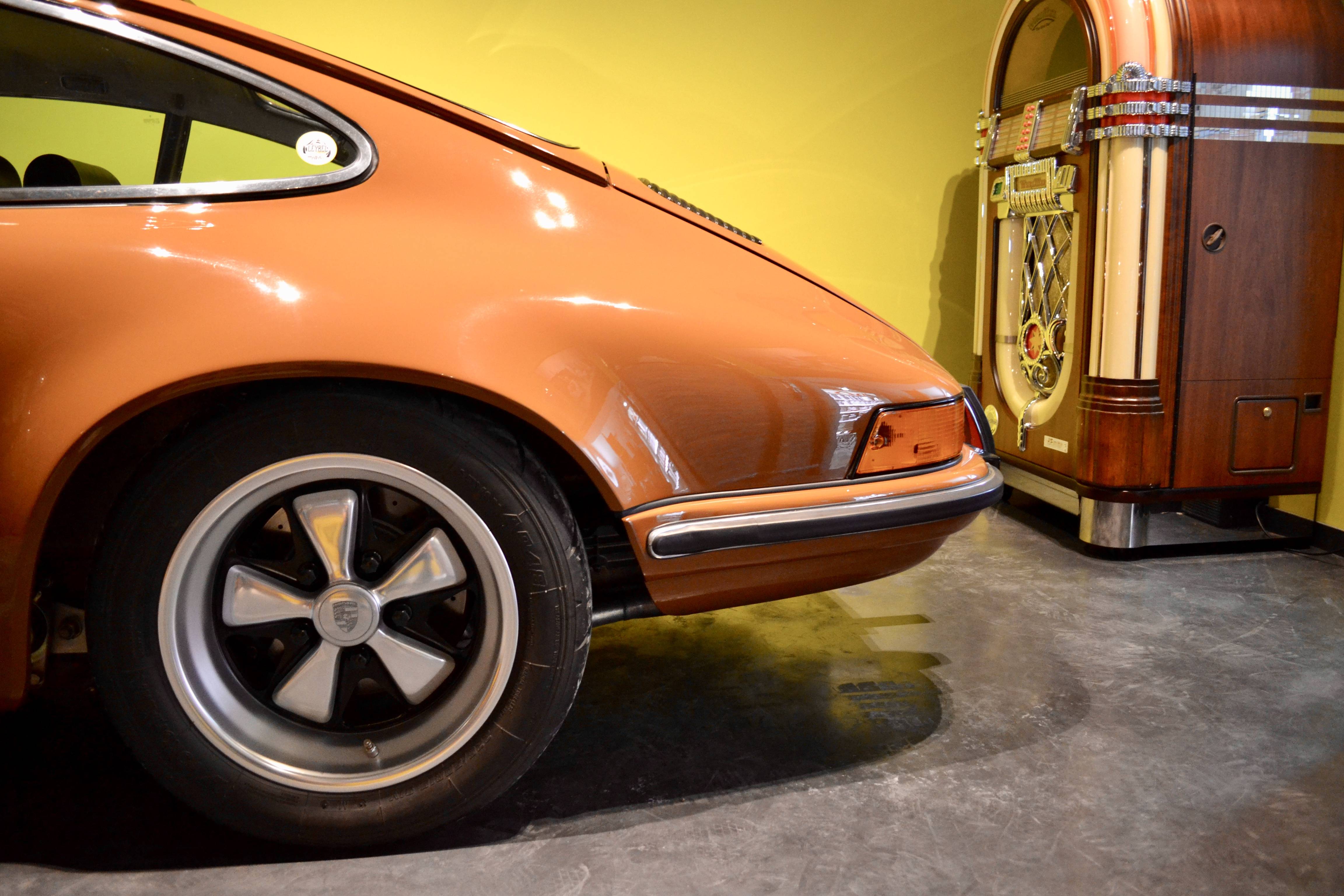 “I’m never really that emotionally entangled in a sale. I’m happy that I had the chance to drive and experience the car, and I use the opportunity to look further for those cars that I haven’t experienced yet.” In his search for the next 911, Franky has gained an interest in the more low-profile 911s that many people would overlook. His ’75 G Series Carrera 3.0L is one of those cars in his collection today. “The Carrera 3.0L is such a wonderful car to drive. It has plenty of character, even though it’s more a cruiser type of 911. It’s very light and nimble, which compensates for it not having the punch that many 911s are known for. I enjoy it every time.” Perhaps one day he may swap the car for a G Series 3.2L Clubsport, which is currently at the top of his list of 911s he’d still love to own. “That car intrigues me, because they are so rare and kind of irrational. You had to pay more for the Clubsport spec, even though they were less equipped than the standard model. On the other hand it benefits from a rennsport halo effect, which makes me very curious to see how it drives.” 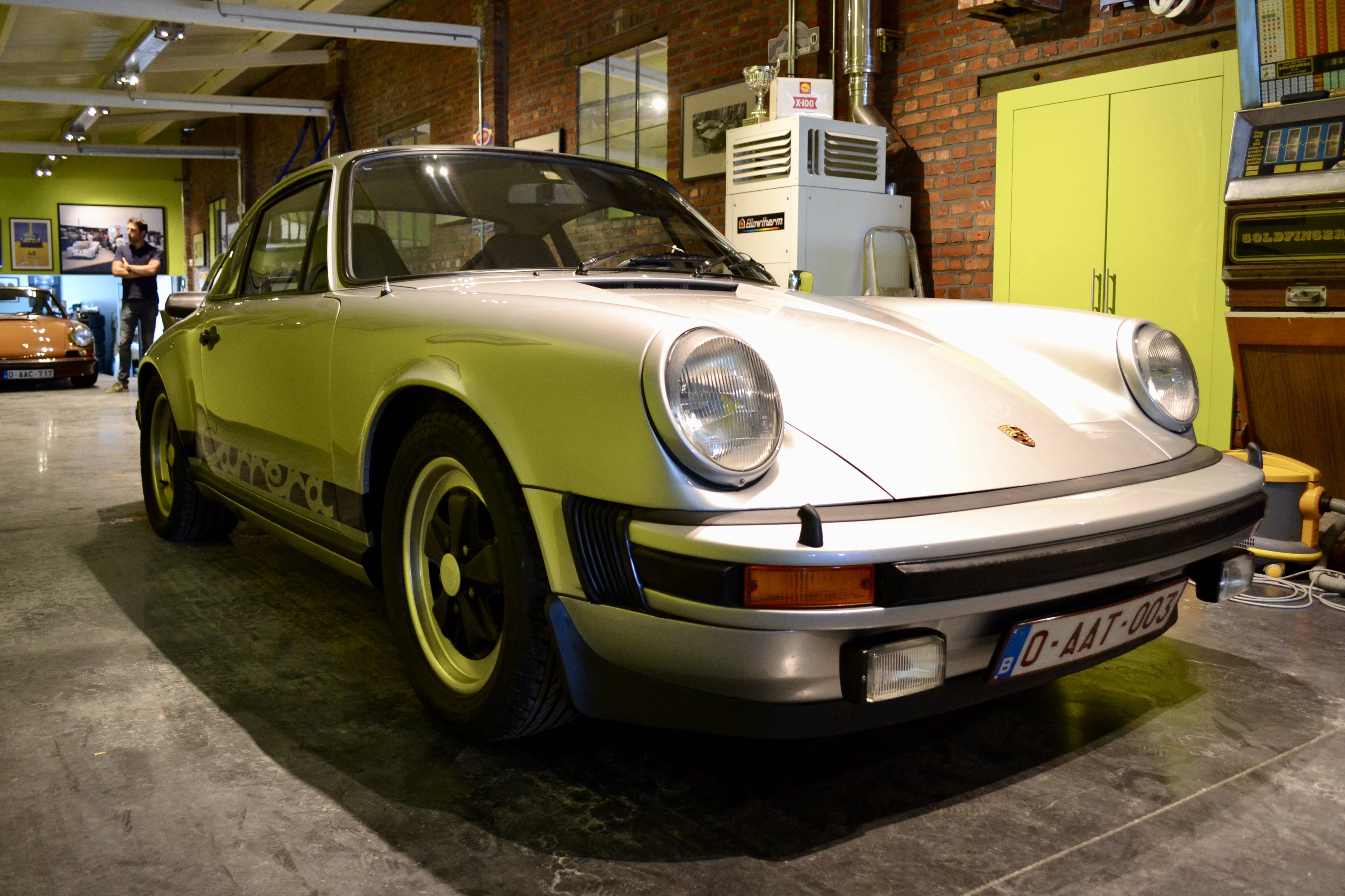 Years of experience in trading Porsche 911s have made Franky quite the specialist. However he does admit feeling the need to read up about the car’s detailed history every now and then. “The Porsche 911’s history is complex. A lot depends on your knowledge of the details, especially of the earlier models. One production year versus another can bring subtle differences, and even sometimes two different model years were produced in the same calendar year. It’s impossible to remember everything.”

His profound passion for the Porsche 911, together with his longstanding desire to drive various iterations of his favourite sports car are the biggest influencers of Franky’s collection. His 964 Carrera RS is perhaps the best example thereof: “I remember looking at the classifieds for a Carrera RS 2.7L when I was young. They were valued at around €50,000 at the time, about the double of the Golf GTI I was driving. As prices kept on rising astronomically year-on-year, the car would always remain out of reach no matter how much effort I did to put money aside. I wanted to avoid that situation for the 964 Carrera RS, a car I cherished since I was a child. Once the moment came where 964 Carrera RS ownership was within reach, I ended up buying two.” 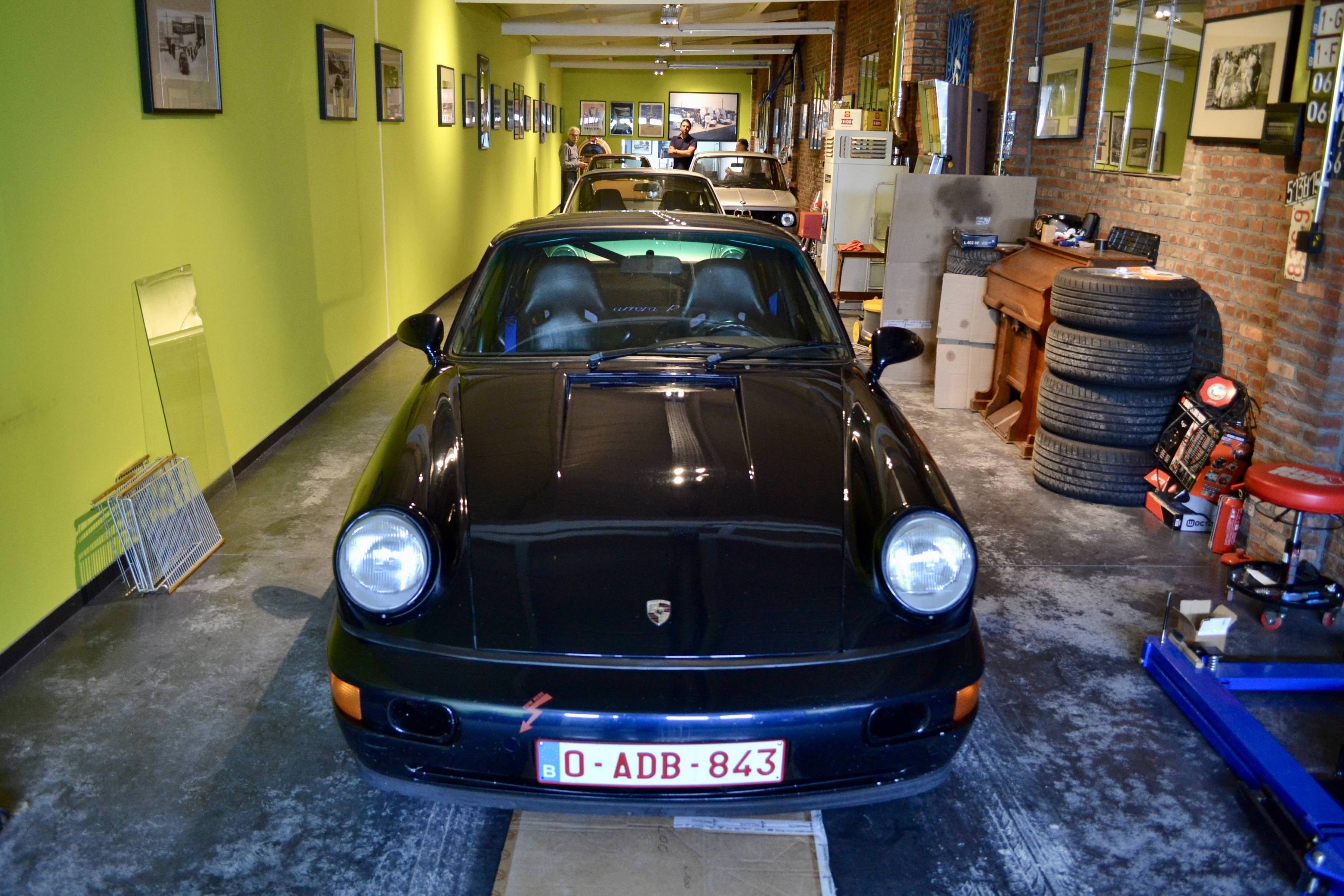 Coincidentally, both 964s were finished in Midnight Blue, and as a consequence some people never realised that Franky actually owned two Carrera RSes. One of the cars was sold a couple years back, when the market for these cars was reaching its peak. The other car is kept as a daily driver and can regularly be seen on Leybel’s Instagram snaps. Its engine displacement has been modified to 3.8L, and the car was delivered with a full roll cage at the dealership which is rare. It shows clear signs of wear and patina, which is exactly how Franky loves them.

The pièce de résistance in his collection is a modified 911S with somewhat of a Singer type of stance: very neat, low and as immaculate as they come. “The original long-hood is still my preferred shape of the 911. But they are very expensive nowadays, and it’s extremely difficult to find an all-original example that hasn’t been restored.” This made Franky resort to a project car which he could build to his own desire. “I bought it about 3 years ago as an unfinished project car, which in hindsight caused a lot of complications. A promised two-week delivery ended up taking months, and once delivered the car still suffered from a series of mechanical hiccups and faults in the finishing. I had all of them fixed. Apart from the brake discs and the oil cooler, the car is now fitted with all-original Porsche parts. The engine is that of the legendary Carrera RS 2.7L. Consider it a sleeper car, which I bought as a true project car to perfect to my wishes. I will hang on to it for a while for sure, it’s a real head turner.” 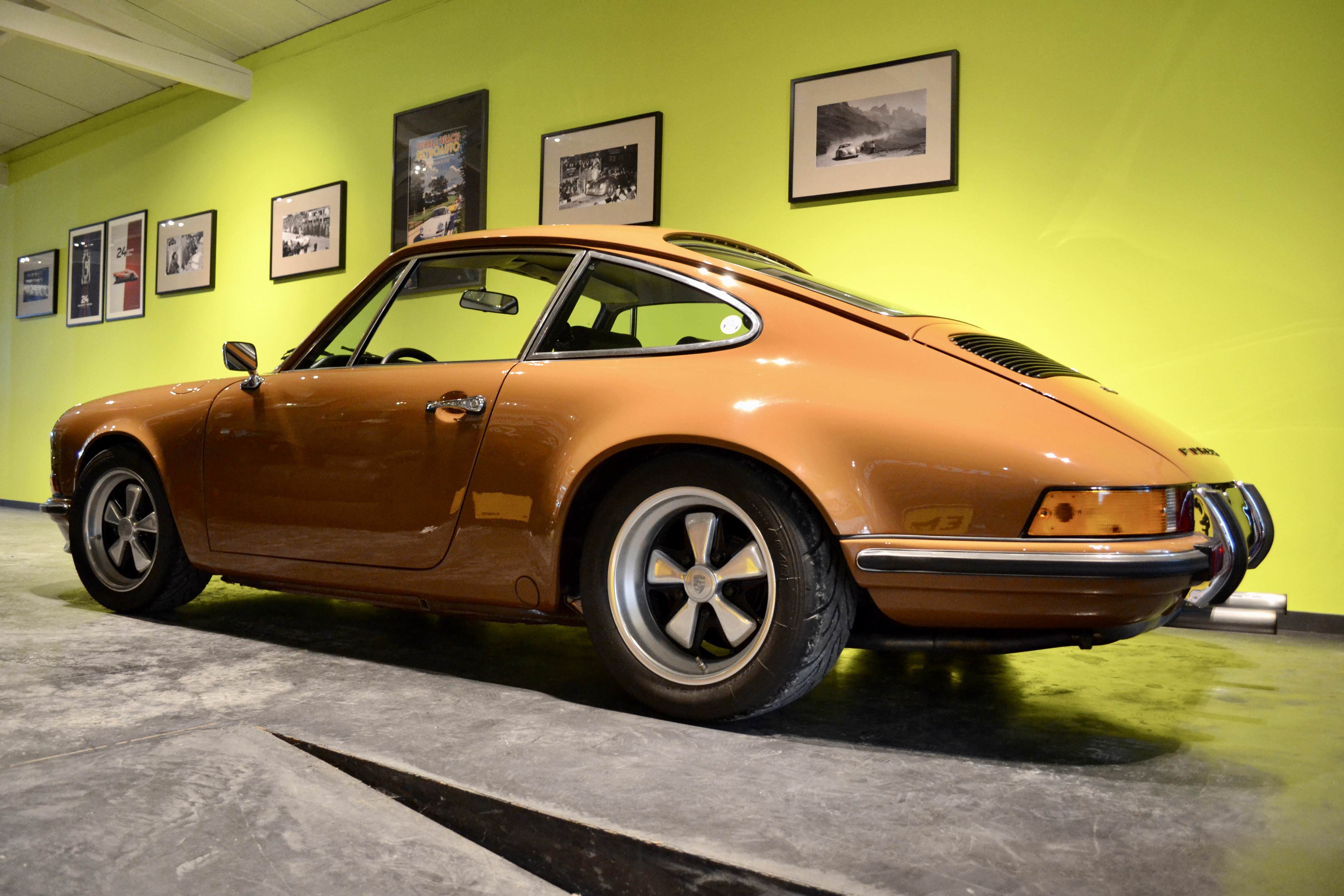 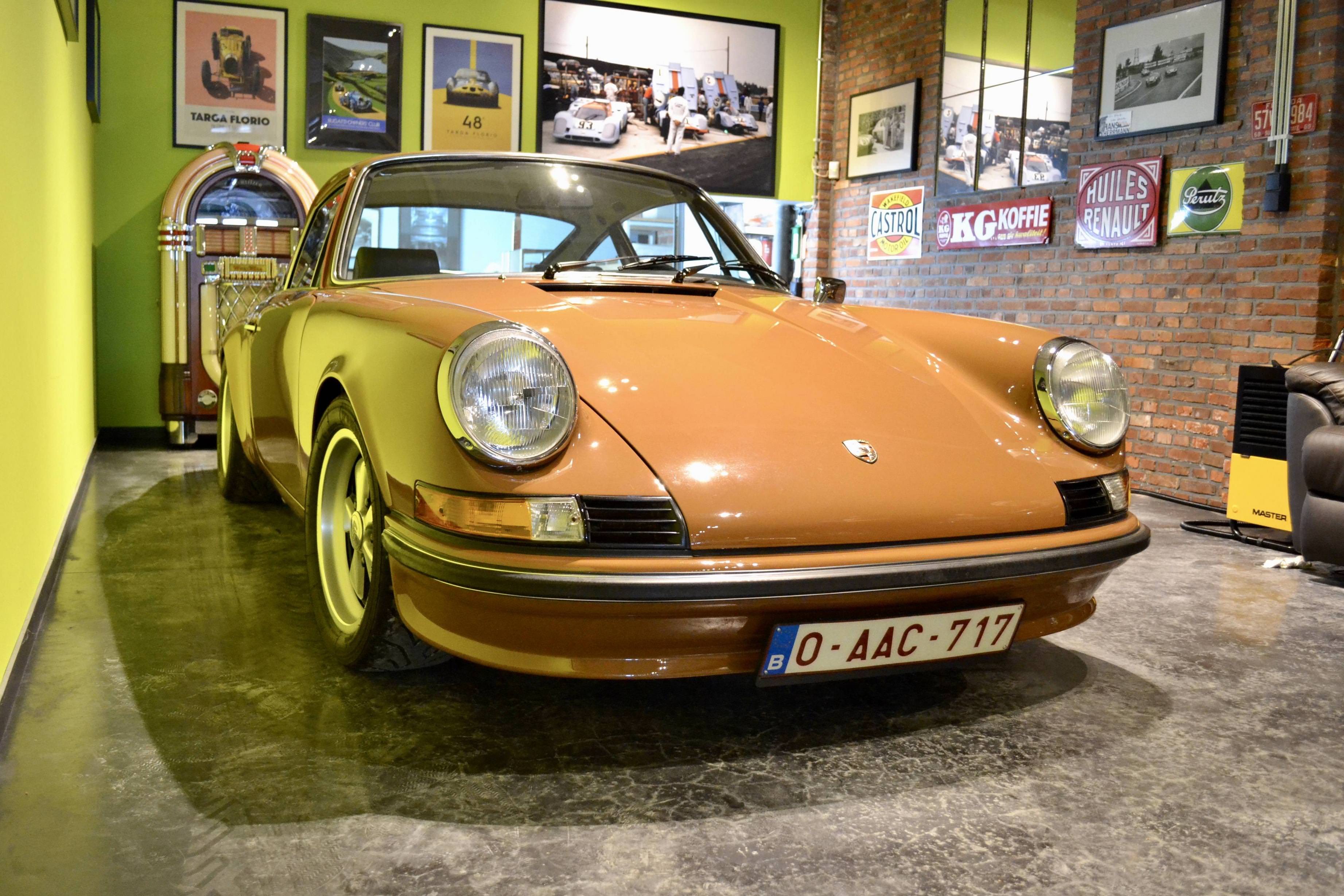 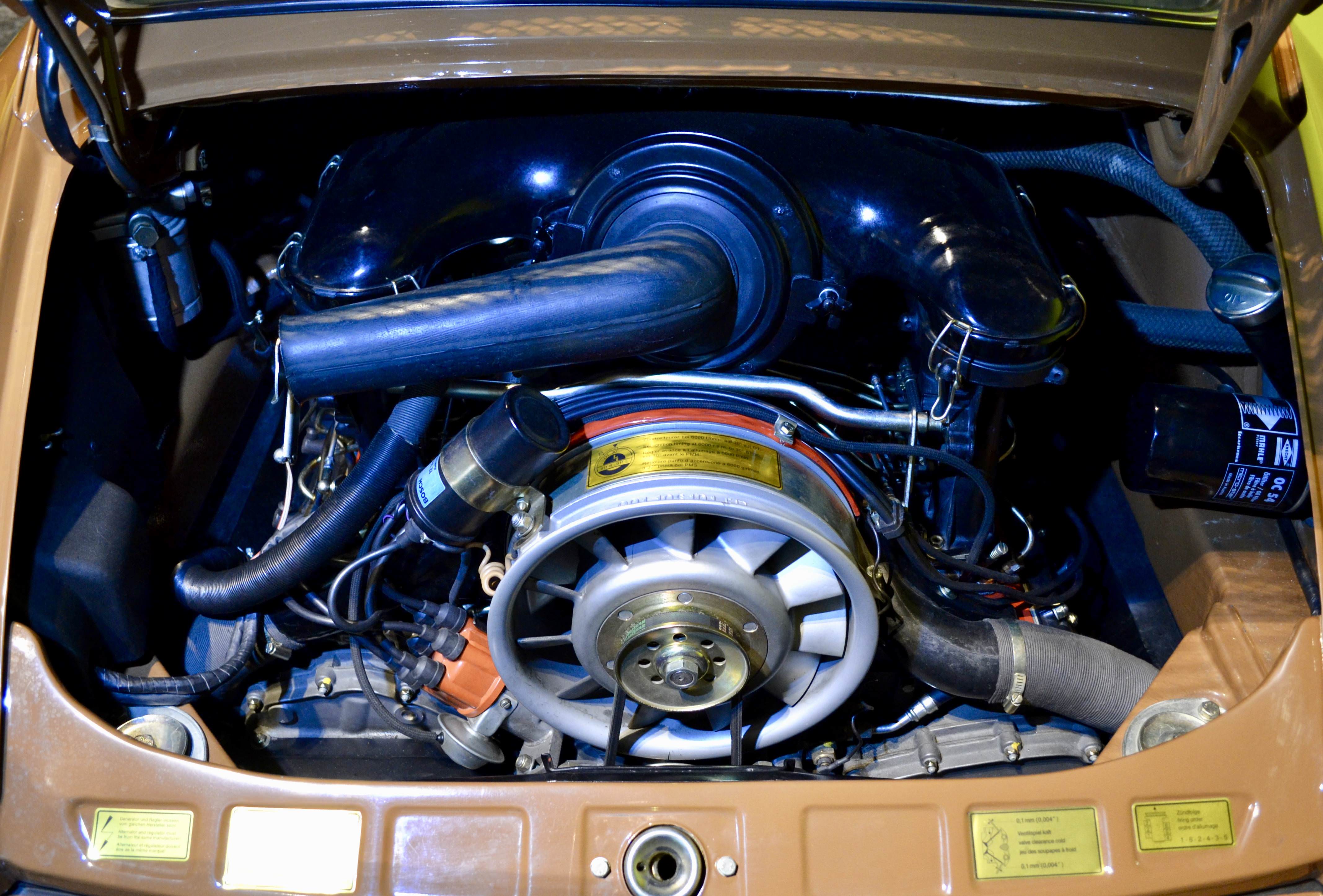 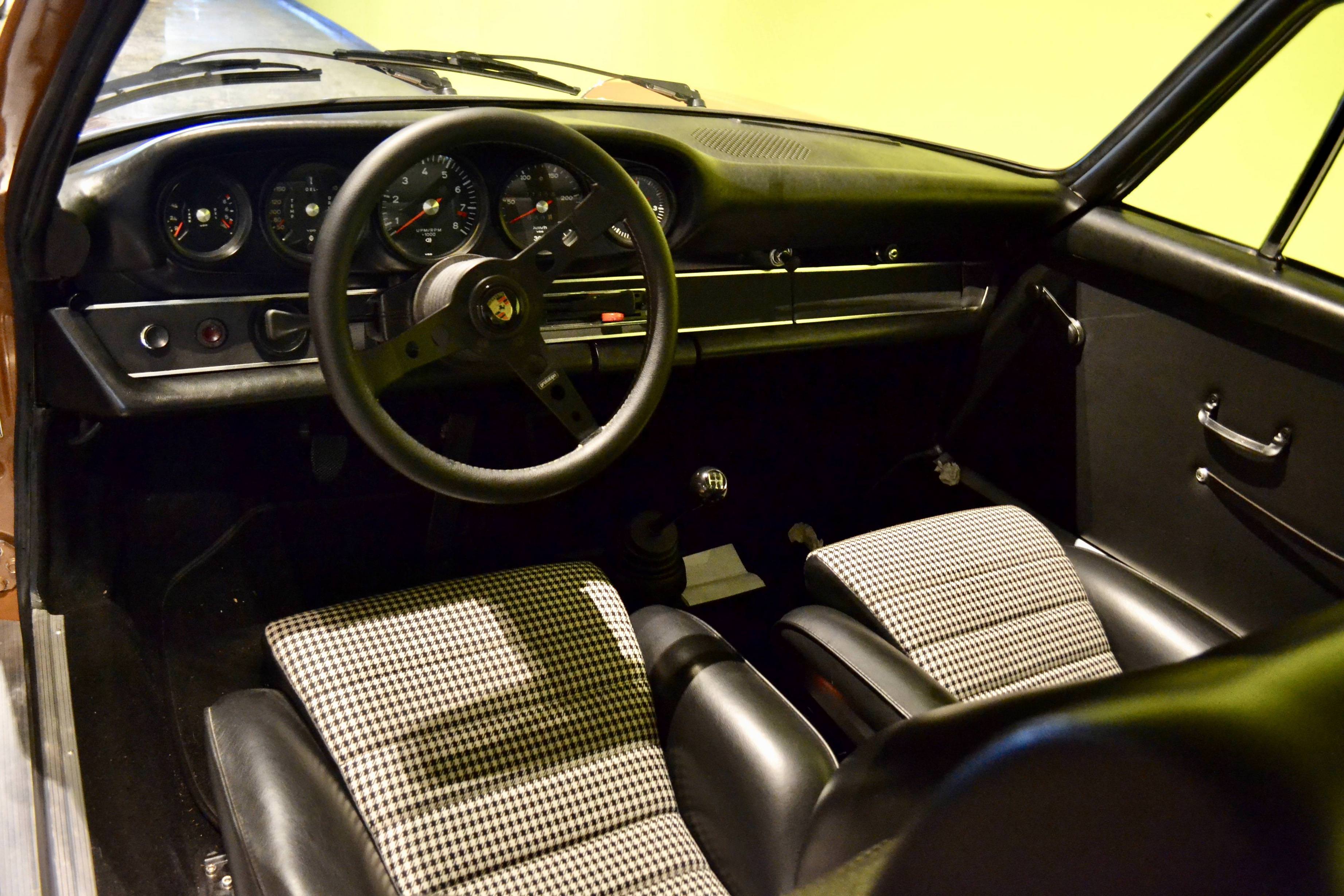 Despite the boom of the vintage car market in recent years, Franky still resorts to a much more traditional way of procuring his cars. “I will check online, but I end up doing most of my trades either through my network or by browsing the classifieds in traditional print such as La Vie de l’Auto. Many of my customers value that they can acquire a car that does not have an online footprint.” The steep increases in 911 prices of recent years do not leave a lasting impression on Franky. “Although I do admit that it benefits my trading business, I will hardly ever let it influence my buying decisions. I want to experience the cars I buy by driving them frequently, just like all the cars I have in my garage today. It stops for me when a car becomes too expensive to enjoy it out on the road.” Those are the words spoken from a true petrolhead, and frankly we couldn’t agree more.

RELATED BLOG ARTICLES
911 Stories - 964 Carrera RS in Hellgelb Introducing the very first episode of 911 Stories; an original series exploring special Porsche 911s and the people who love them. We are delighted to feature a truly special 911 for our first story, being none other than the mythical 964 Carrera RS!
Our top picks at Retro Classics Stuttgart This year marked our first visit to Retro Classics in Stuttgart, also known as the world’s largest classic car show. A home game for all things Porsche, where we highlight some of the special and spectacular 911s on display.
The X files: the 964 Turbo 3.6L X88 cars Few Turbo generations have seen such a rich production legacy as the 964. If you consider the Turbo 3.6L to be the most epic, then you need to read up about the X88 specials that were among the most powerful and exclusive sports cars of their time.