Introducing the very first episode of 911 Stories; an original series exploring special Porsche 911s and the people who love them. We are delighted to feature a truly special 911 for our first story, being none other than the mythical 964 Carrera RS - more info about this special 911 at the end of this article. 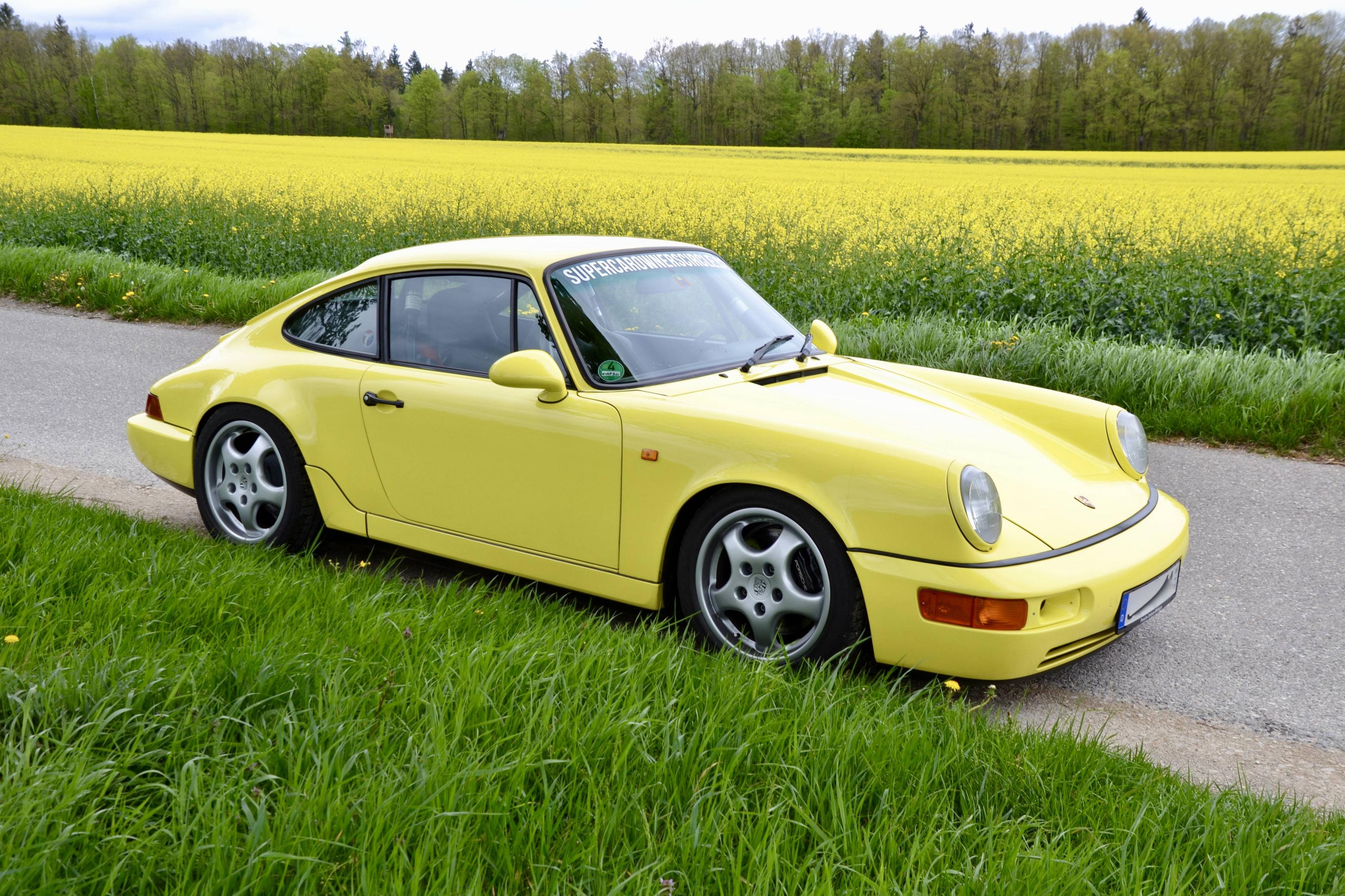 Our minds were wandering in curiosity as we set course for Germany. We were very fortunate to get in touch with Fabian* (alias porsche.964.rs on Instagram) as a result of our open request to Porsche 911 owners willing to share their story with us. He is the lucky owner of a wonderful 964 Carrera RS finished in paint-to-sample Light Yellow (German: Hellgelb), a Dark Grey (Italian: Grigio Scuro) 599 HGTE and a wonderful 993 Carrera finished in paint-to-sample Riviera Blue (German: Riviera Blau). Three very special cars finished in rare colours, which is exactly one of two criteria that serve as a red line through Fabian’s car collecting hobby, coming from a passion for Porsche that grew gradually through several encounters with the brand. 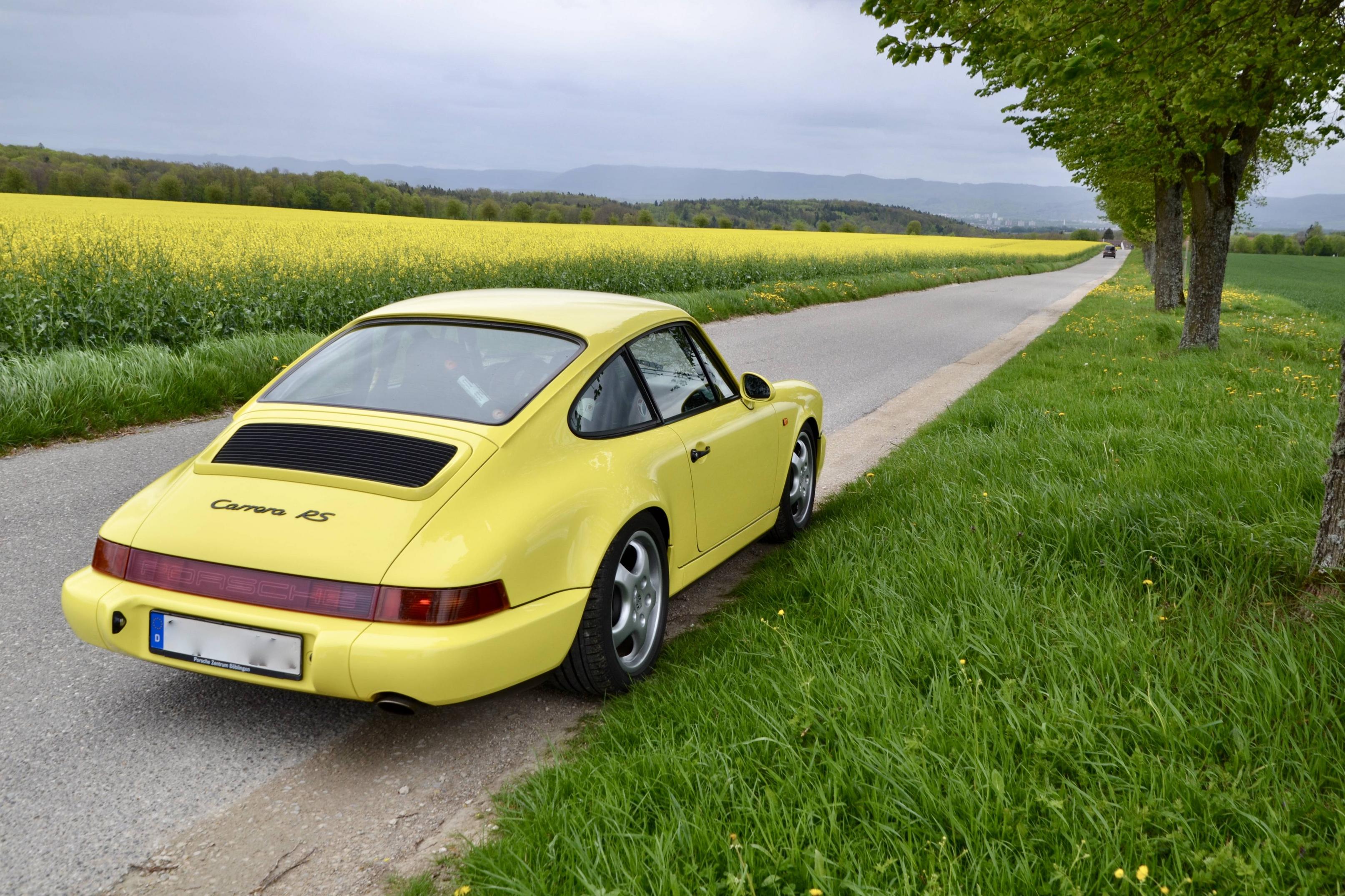 “My passion for Porsche started when I was still a teenager. My brother, who has played a defining role in developing my passion for the brand, took me for a spin in a 911 G Series Carrera 3.2L convertible that he had borrowed from a friend. This was my first experience in a 911.” Having received a first taste of the 911, Fabian wouldn’t have to wait long to understand the driving experience either. “I completed part of my studies in Canada where I managed to obtain my driver’s license at the age of 17. When I returned to Germany I was lucky enough to meet a friend of my godfather who let me drive his 911, which was also a 3.2L convertible. That was my very first time behind the wheel of a 911. It was a chance for me to really understand what it felt like to drive that car.” 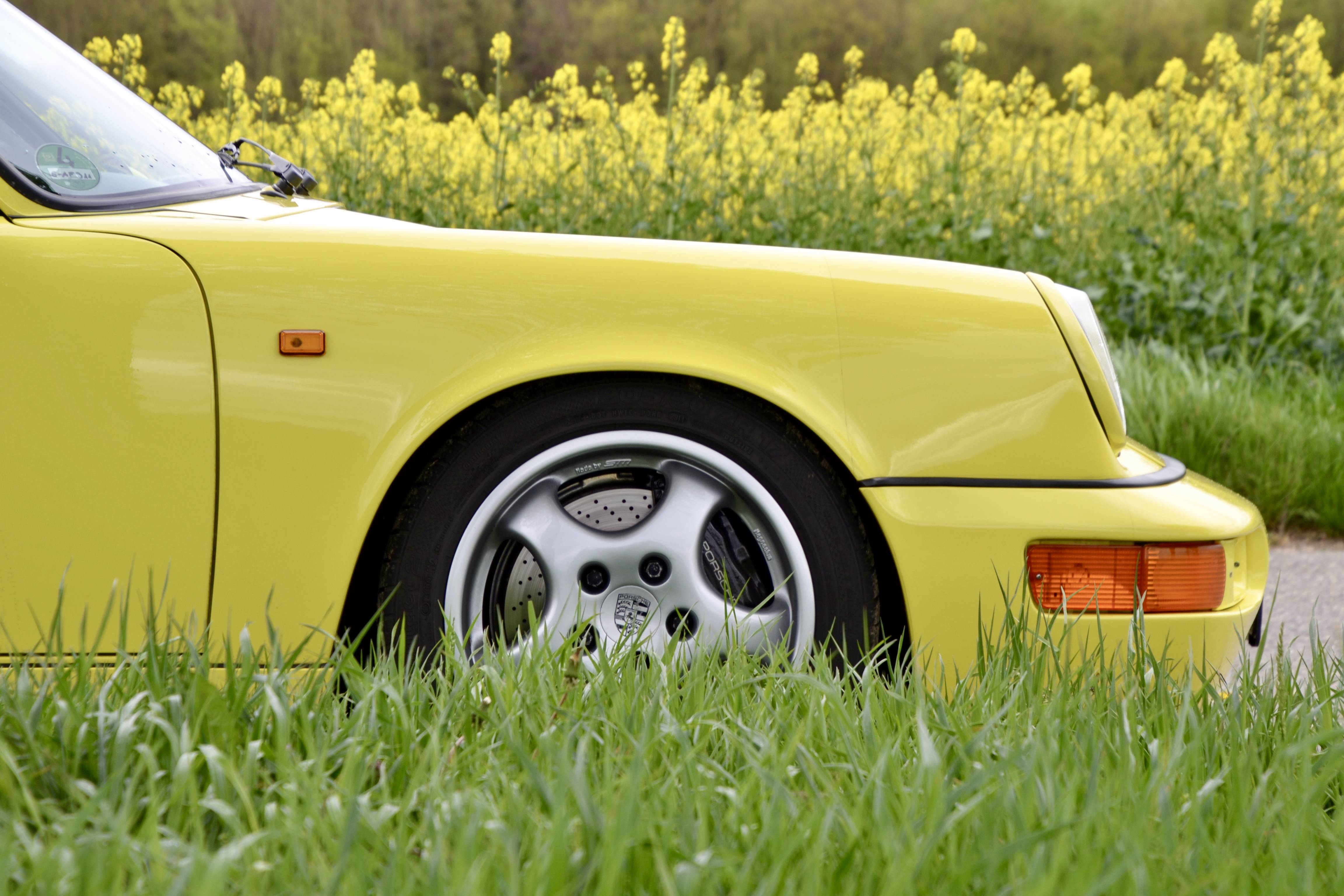 As wonderful it may be to drive the 911, many enthusiasts’ first entry to the Porsche brand is of a more humble kind. Fabian was no exception, as his first Porsche was an old 944 he had acquired from his brother. “It was an early version of the 944, in standard trim and a very nice looking car. The problem was that it had been involved in 3 accidents so it turned out to be a piece of junk and I eventually had to sell it. (laughs) But it was my first own car and I really loved it.”

Many enthusiasts will agree that there is often one defining moment that sparks our enduring passion for the 911. For Fabian this moment came about when his brother bought a Rubystone 964 Carrera RS N/GT. “That car blew me away. I had never experienced anything like it before. That car really started my passion for the 911.” 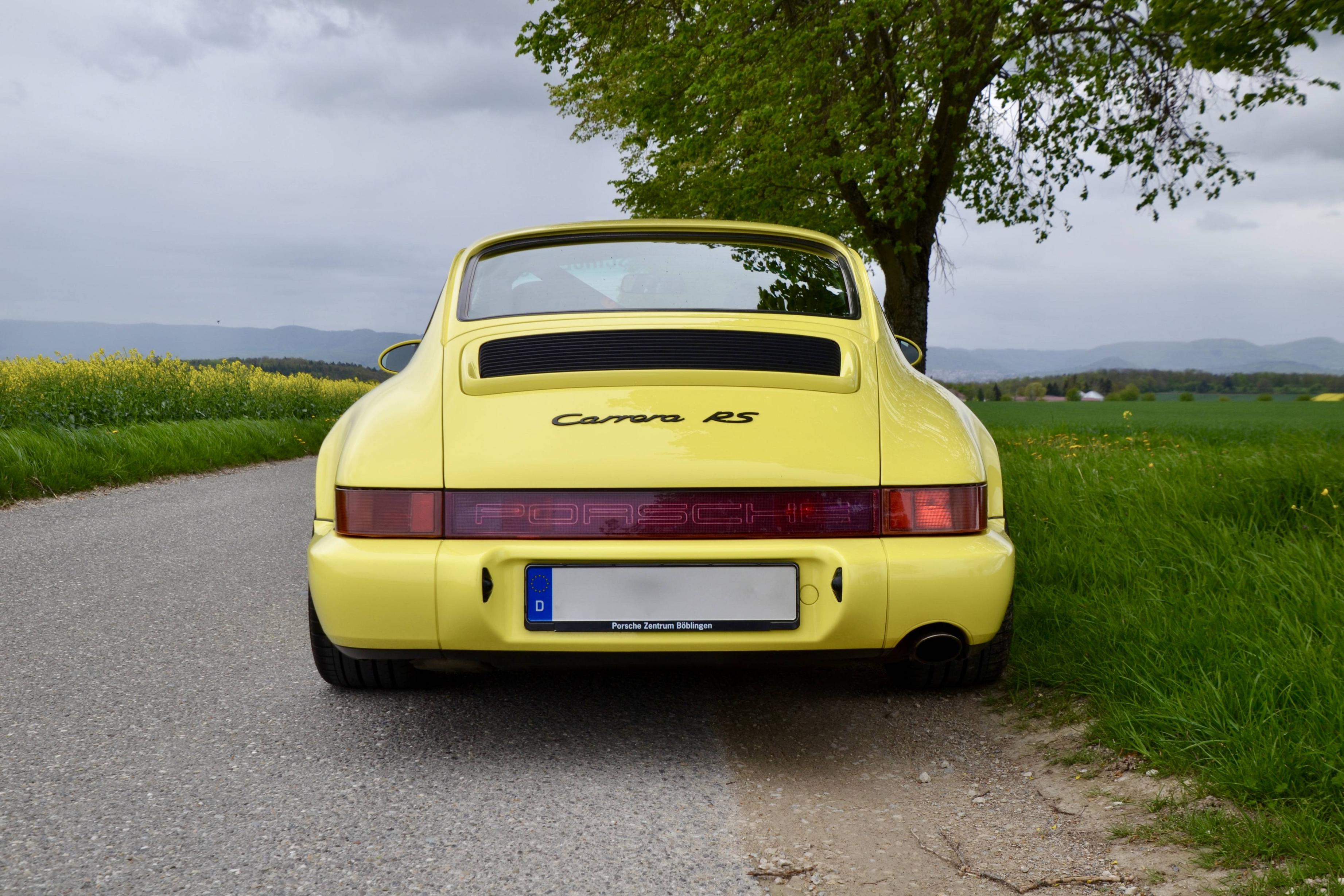 At that time Fabian didn’t expect being able to afford a 911 for himself, so he decided he might as well work for Porsche in order to maximise his chances of owning one. He started his automotive career as a Porsche salesman which is how he got the chance of buying his very first 911: the Riviera Blue 993 Carrera. “The interesting part of the story is that this car was traded in by one of my clients. He had bought the car from a private dealer who had withheld information that the car had been involved in an accident. Disillusioned by discovering what he had bought, my client decided to trade it in for a new Boxster at the time. Given those circumstances I was able to buy it cheap. And I mean really cheap.” The 993 came to play an instrumental role in Fabian’s life. It was the car that introduced him to his wife, who is very passionate about air-cooled Porsches as well. 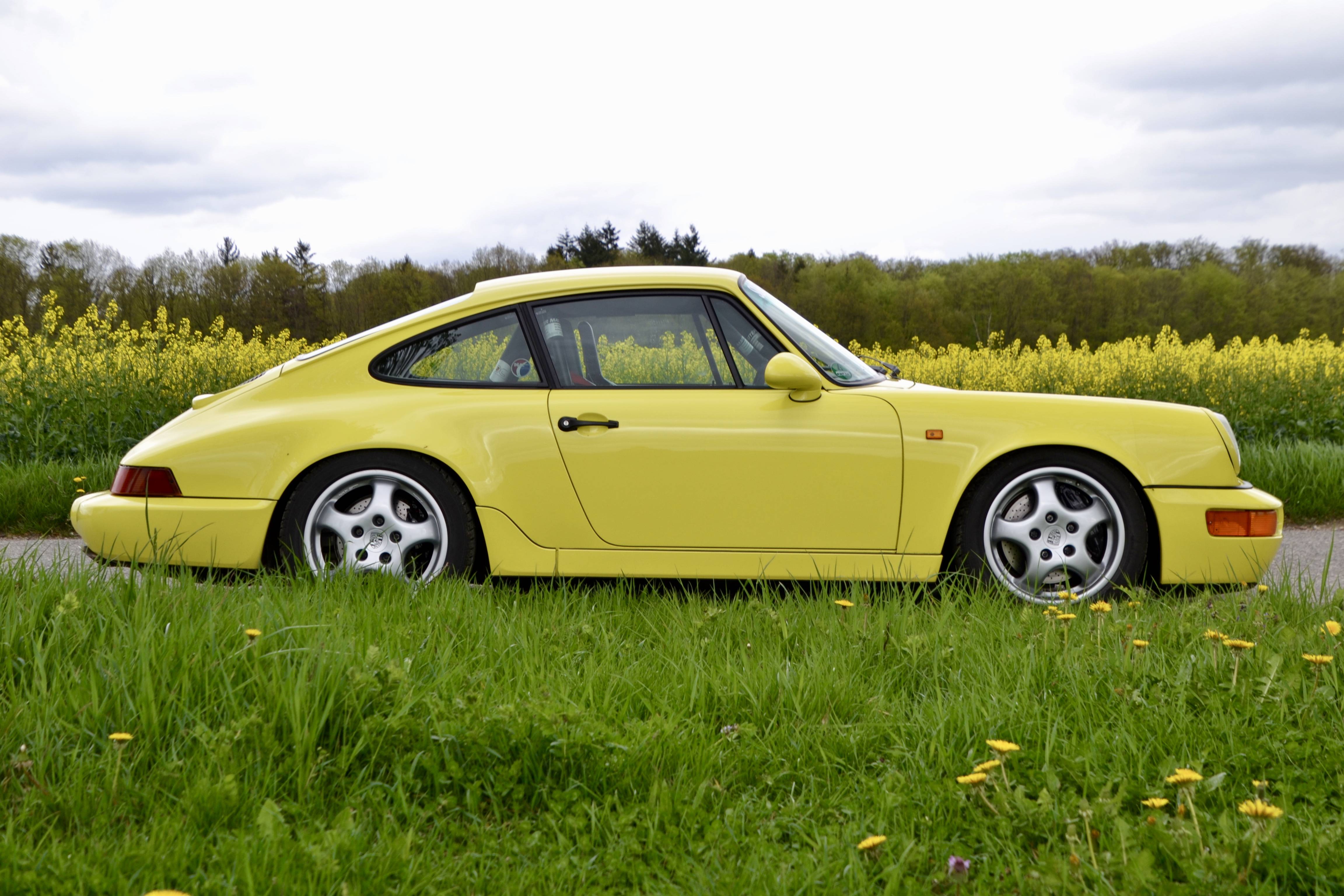 “I am very happy that my wife is so passionate about cars, especially Porsches. That brought us to eventually buying the 964 Carrera RS back in the autumn of 2011. We both love it and drive it.  She even drives my Porsches harder than I do, it’s really fun.” The most important criterion for sourcing his perfect 964 Carrera RS was to find one with a compelling story. It didn’t have to be the one with the lowest mileage, nor the most expensive one or the most original one on the market. “I decided very spontaneously on the car I wanted mainly due to the car’s colour and its story. All my cars need to have a special colour and a gripping story.” 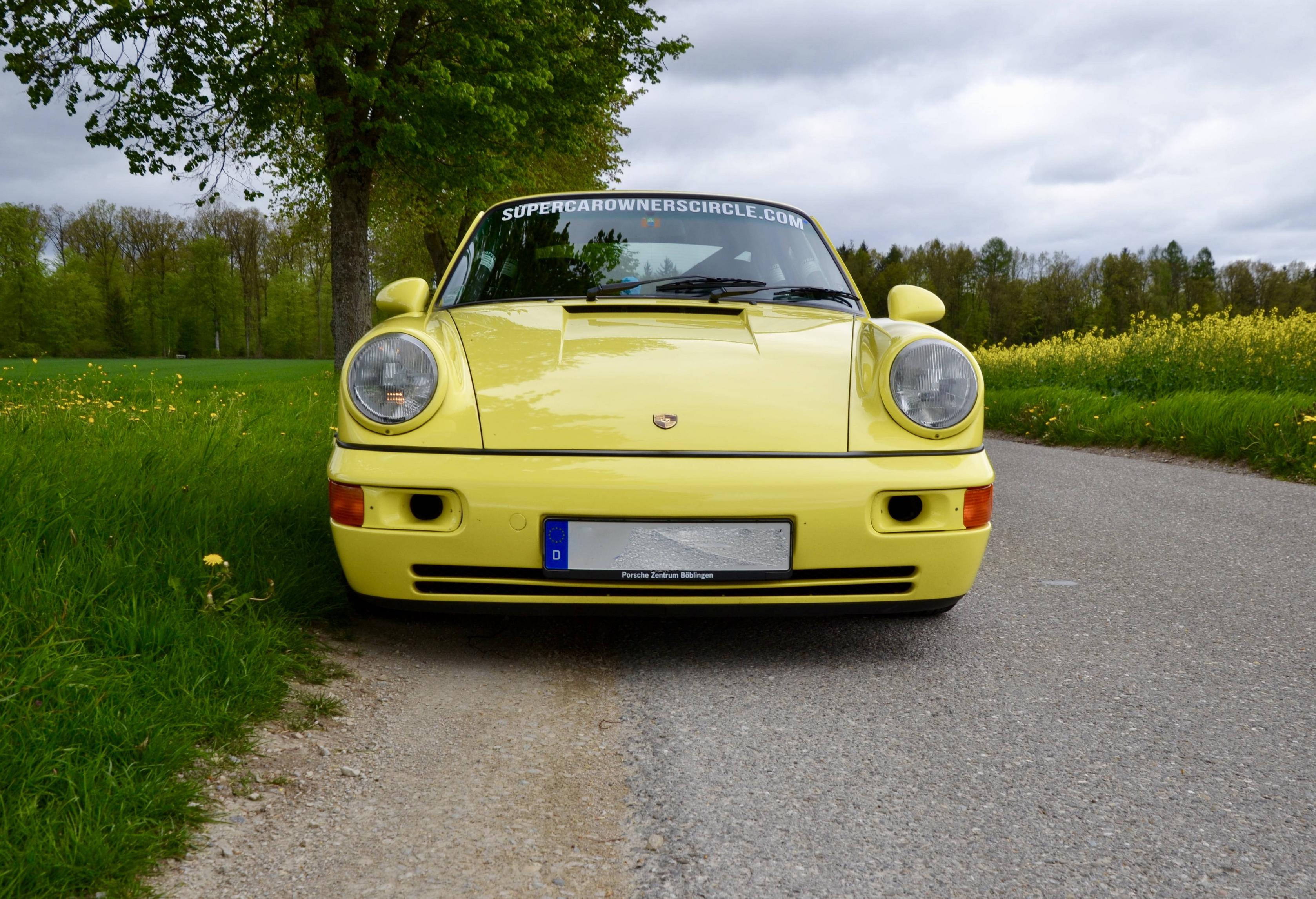 There were only three colours within Fabian’s consideration set: white, light blue or yellow. The day when he discovered the story behind a Light Yellow example offered by TJS German Sports Cars, he was immediately sold. “The car belonged to a German entrepreneur who drove it intensively. One day he decided to buy a 964 Carrera RS 3.8L and wanted to pass the 3.6L car on to his son. His wife agreed under the condition that he would make the car safety proof, after which he fitted the Matter roll cage and fire extinguisher. All changes were executed by Porsche and were documented from the original invoice onwards. This was a great story to me, which eventually convinced me to buy this particular car. I went to the dealership and bought it. They had probably 4 other RSes available at the time, but I didn’t even consider them. I was convinced.” As confirmed by 964 RS Database there are only six 964 Carrera RS cars known to be finished in Light Yellow: five Lightweight and one N/GT variant, making it a very rare sight. 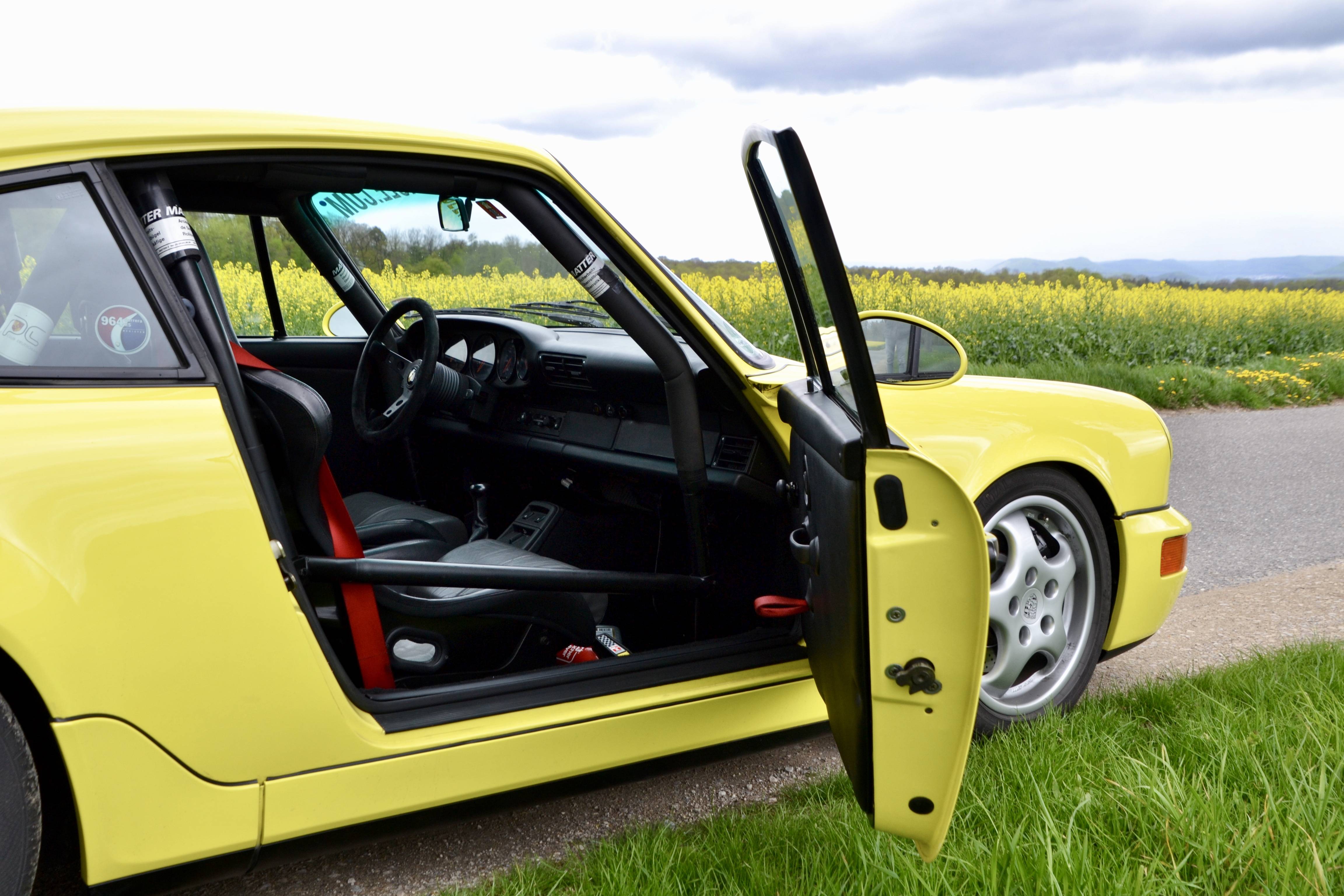 The decision to search for a 964 Carrera RS was an easy one for Fabian. It was the car that started his passion for the 911, having experienced it first hand with his brother’s N/GT. He also has a weak spot for the 964 in particular. “To me the 964 Carrera RS is the perfect 911, providing a mix of the classic 911 shape with some more modern aspects. A sports car doesn’t have to be bigger or wider than a 964 Carrera RS. It’s just such a purposefully built car, yet when you sit in it you immediately are comfortable and everything feels familiar.” 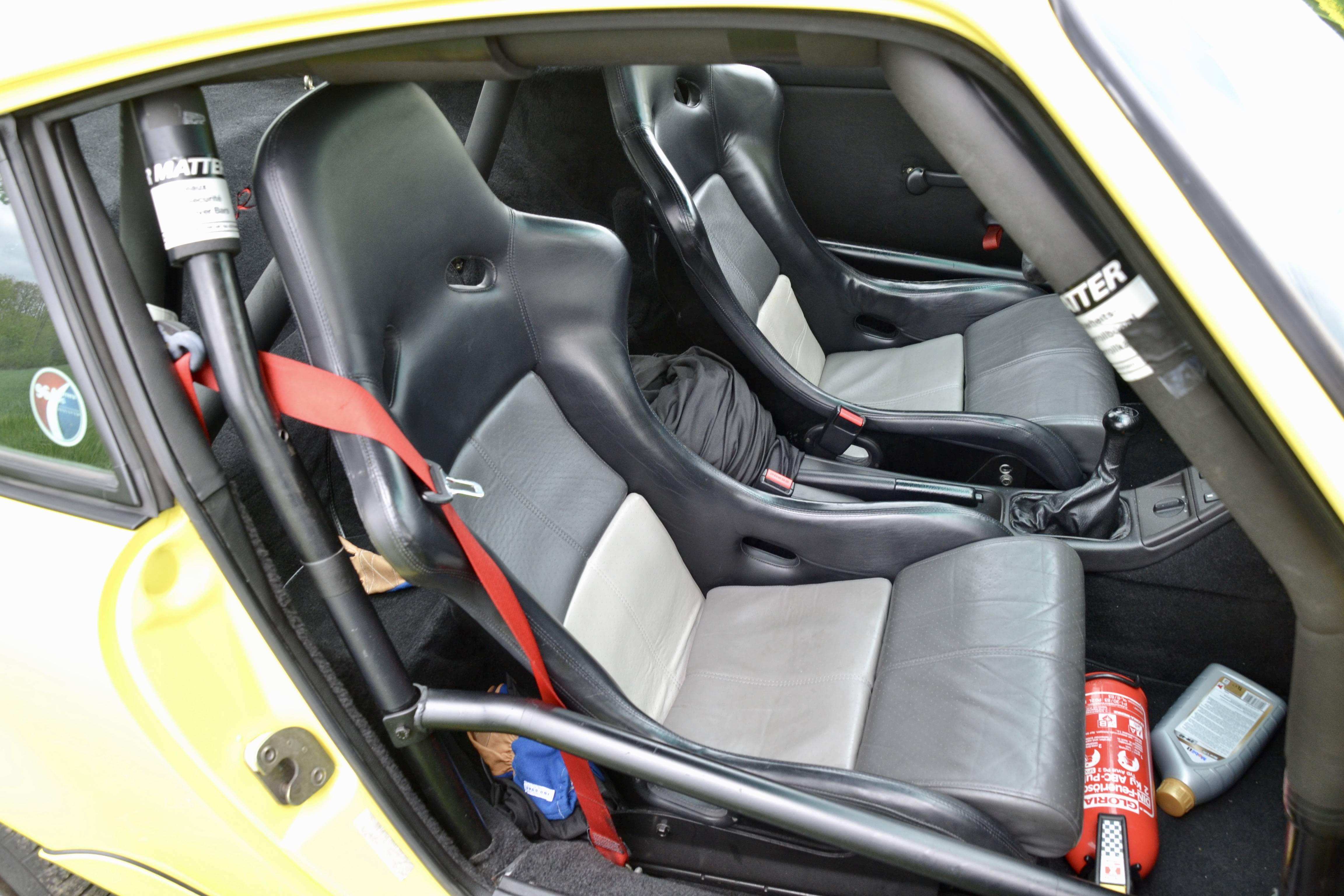 We can only confirm that last thought, having taken the Carrera RS out for a spin with Fabian across the German countryside. The bucket seats are surprisingly comfortable and the typically sober 911 dashboard feels oddly familiar for a car of over 25 years of age. The 964 feels smaller and more grounded versus a modern-day 911. The startup is effortless and the acceleration is still sensational even though its stats are closer to those of present-day hot hatches than of supercars. “I still get goosebumps when driving the RS. It’s such a raw and visceral experience. The car makes you work hard in order to have fun, it really asks you to step up and that’s what I love so much about it. The goosebumps already start when I open the garage. The car smells in a particular way, different from any other car I have owned. It remains such a sensational piece of kit that I wouldn’t want to trade it in for any other car. (hesitates) Or perhaps I would, but only for a Light Yellow N/GT.” 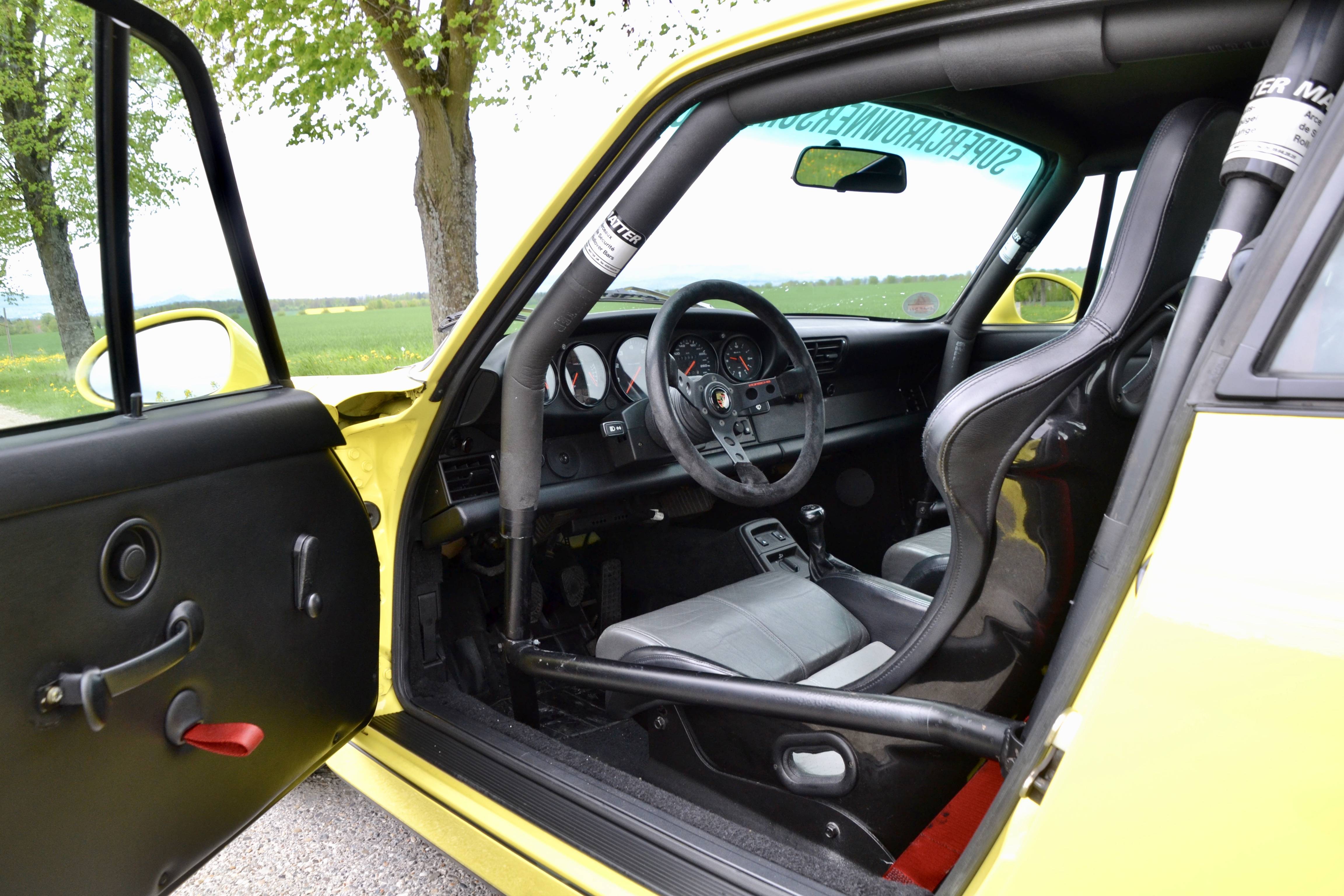 The market for the 964 Carrera RS has cooled down a bit as of late, yet the prices for N/GT cars remain at the top end. Trading in his current Lightweight for an N/GT at a significant premium is not immediately a priority for Fabian. “The good thing about the Lightweight is mainly that it still has carpets. This makes it somewhat useable on a daily basis, which the N/GT to me is not. My particular car doesn’t have a radio, it doesn’t have air-conditioning and it doesn’t have sun visors because of the roll cage. When I drive to Switzerland I am alone and I cannot listen to the radio or call anybody because of the noise inside the cabin. On rare times like those perhaps I could use a bit more of the comfort that today’s track-focused sports cars provide, but on the other hand this raw driving experience is exactly what the 964 RS is about. It’s as pure as driving can get: you hear everything, you feel everything and you smell everything. That type of sensation is something that modern cars cannot provide anymore in my opinion.” 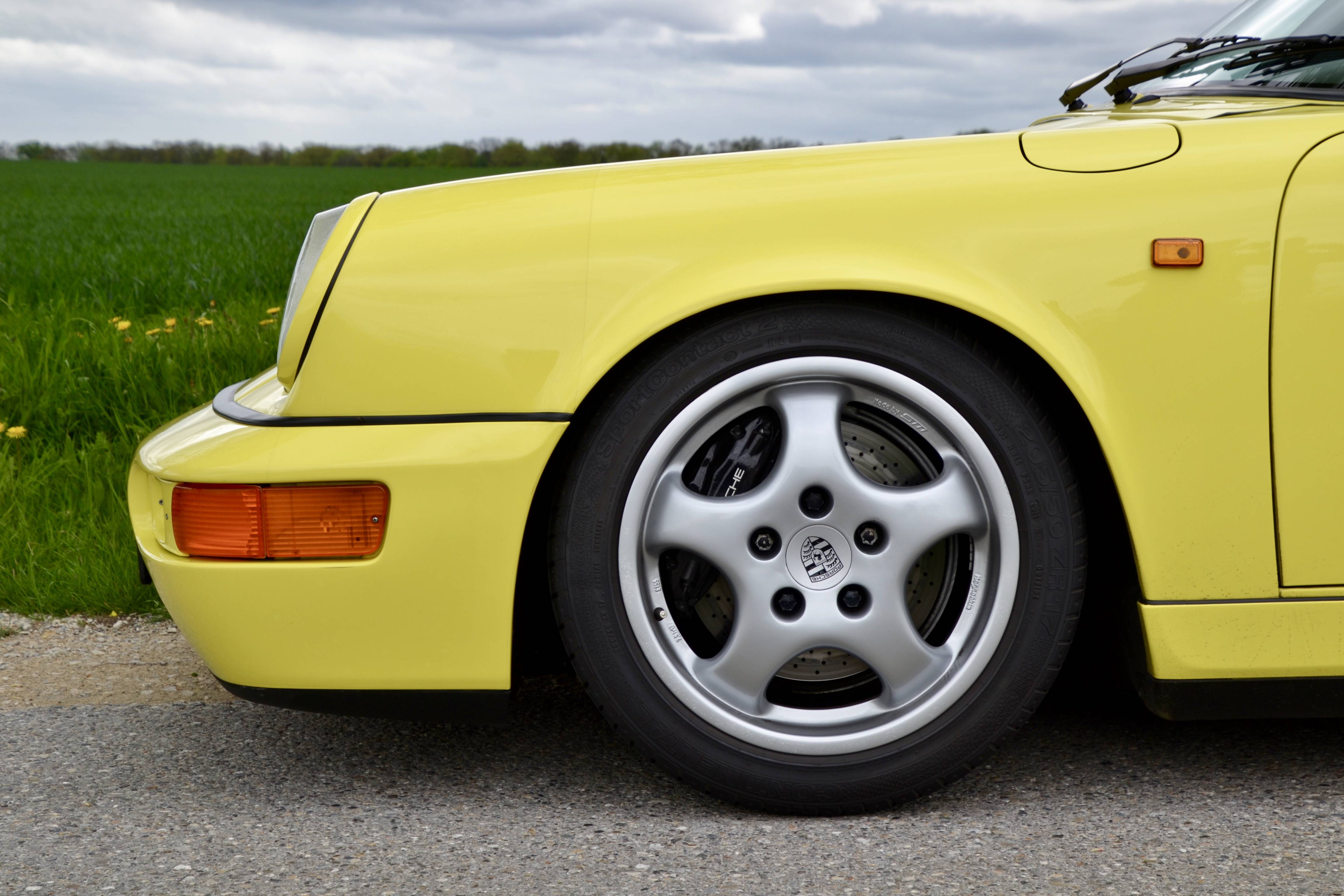 When asking about his next big car project, Fabian’s answer is as clear as it is logical: a thorough restoration of his beloved 993. “I still use this car for every private drive on a daily basis. It has way over 200,000 kilometres and it still runs ever-so smoothly. It’s simply amazing how good they made these cars 20 years ago. It’s an old car but it is still so good, and it has given us so many great moments. It deserves a full restoration.” 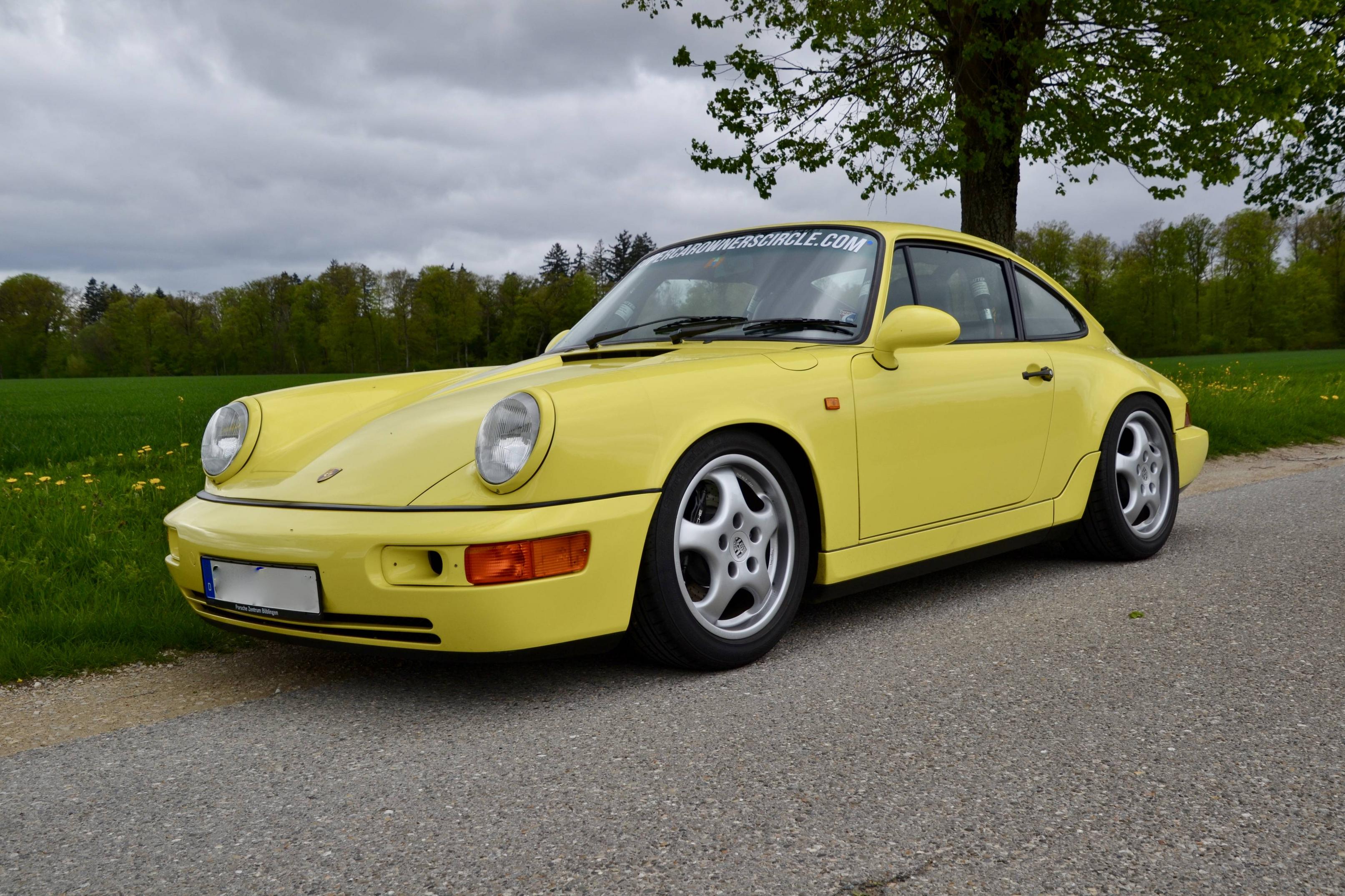 We couldn’t help but drive back with a big smile on our faces after meeting Fabian. Not only because we got a chance to experience one of our all-time favourite 911s, but perhaps even more because of the warm welcome we received by a great 911 enthusiast willing to share his passion with others. It was a truly humbling experience and we are looking forward to the next one. “I am in a very fortunate position to own and enjoy my cars. I really appreciate that I can drive what I love every day. That’s why I try my best to enjoy it to the maximum by driving my cars as much as I can and letting other people enjoy them as well. This gives me great pleasure.” 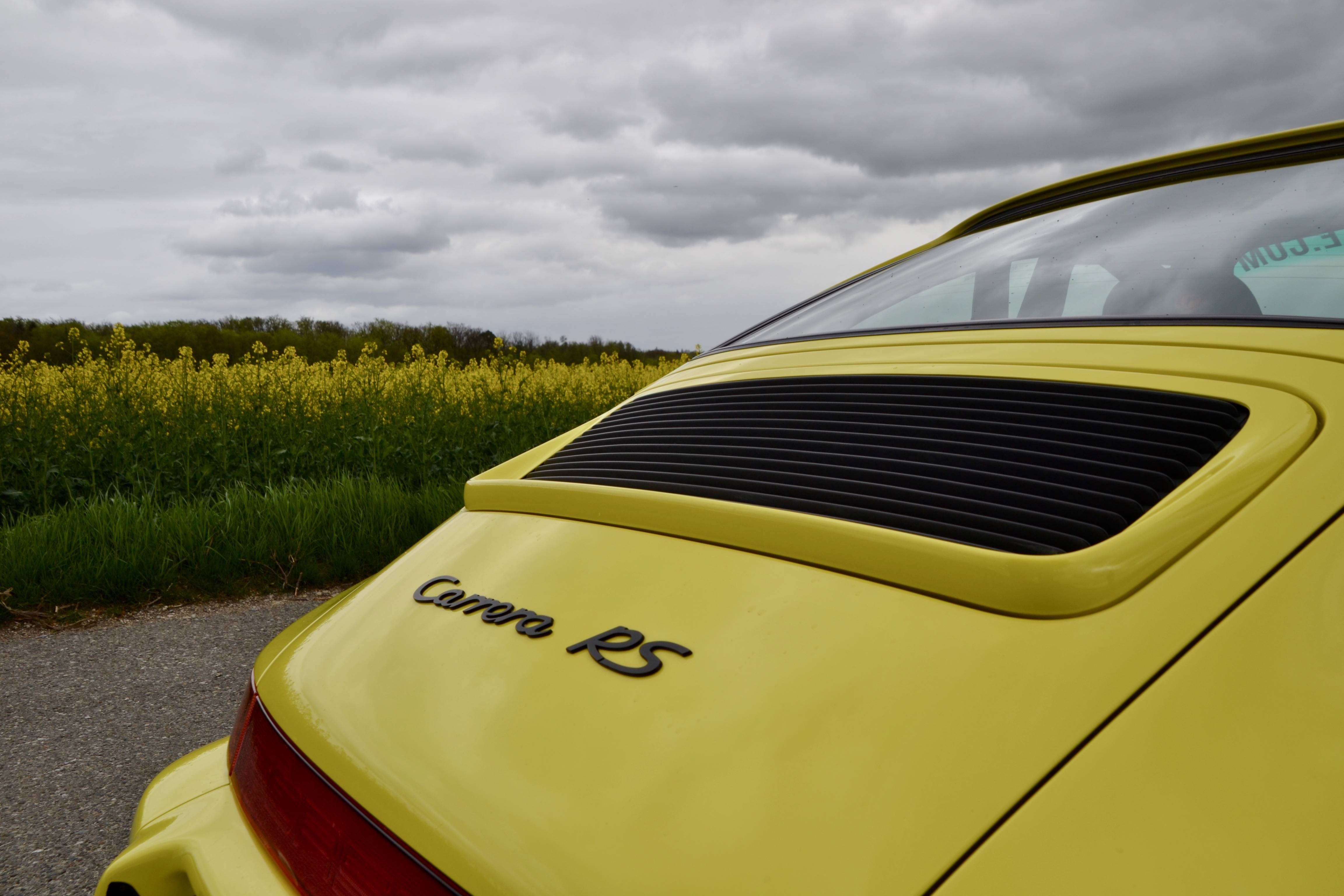 The 964 Carrera RS needs no introduction among 911 enthusiasts. As for all the Rennsport 911s that preceded it, the 964 RS was the closest one could get to having a race-ready 911 fit for road-legal use. Introduced in 1992, the RS featured a revised 3.6L flat six M64/03 engine with a lightweight flywheel, delivering an increased power output of 260hp.

The engine was coupled to the G50/10 transmission with closer ratios, steel synchromesh and an asymmetrical limited-slip differential. Stiffness was largely improved thanks to the seam-welded bodyshell and the use of stiffer springs and shocks for the car’s suspension.

Weight was cut by fitting windows made from thinner glass, using light alloy for the bonnet and fitting the beautiful but fragile magnesium Cup wheels. This made the RS around 120kgs lighter than the European Carrera 2 model, tipping the scales at just over 1,230kgs.

Customers were given the choice between three variants, depending on how much comfort one was looking to give up on. The N/GT was the most stripped out, race ready variant of the Carrera RS. The Lightweight had more creature comforts, mainly carpets and no roll bar, versus its more extreme sibling. The Touring variant was the most comfortable variant, which came with extra optional equipment such as comfort seats and a sunroof.

*All names in this article have been fictionalised to protect the owner’s privacy.

RELATED BLOG ARTICLES
Our top picks at Retro Classics Stuttgart This year marked our first visit to Retro Classics in Stuttgart, also known as the world’s largest classic car show. A home game for all things Porsche, where we highlight some of the special and spectacular 911s on display.
Pure 911 passion at Leybel Classics There are hardly any better ways to spend your time as a 911 enthusiast than to visit a 911 collector. We were feeling quite thrilled as we were on our way to what would be our first visit to interview a collector.
The X files: the 964 Turbo 3.6L X88 cars Few Turbo generations have seen such a rich production legacy as the 964. If you consider the Turbo 3.6L to be the most epic, then you need to read up about the X88 specials that were among the most powerful and exclusive sports cars of their time.